I WILL NEVER STOP TRYING TO HELP ALL GOD'S CREATURES.
ONE AT A TIME.
Gayle Bunney

In my travels I have tried to help many Creatures, domesticated and wild ones that are in distress. Sometimes when you think you are winning the battle, you end up heart broken instead. This is one such case.

Often when I find a dog in distress from rampart NEGLECT I will attempt to buy the dog. If that doesn't work, I gently offer to Groom, Vaccinate, Deworm, and treat any Medical Conditions as needed. For FREE if the person simply has no money to care for the animal.

In this case, I told the owner I needed to practice my Grooming Skills to get him to let me help his dog, Bingo. Although many miles from my home, my experienced, animal care helper and I headed out on the long drive to see what we could do for little Bingo. 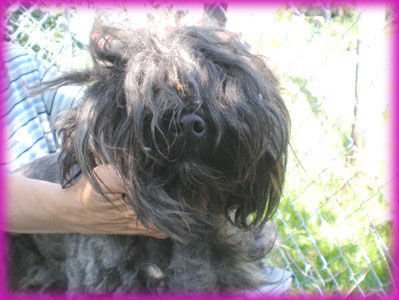 The gunk from Bingo's eyes had matted the hair on his face so bad, it was evident that he could hardly see. 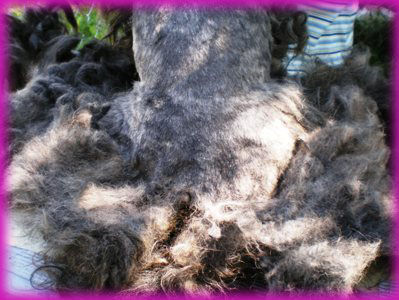 After 2 hours of shaving and using scissors we still only had his back and sides done here. All the hair surrounding Bingo in this picture was one complete mat of filth, crawling with Lice and Fleas. The filth on his hind end was a huge mat of stool the size of a football almost. 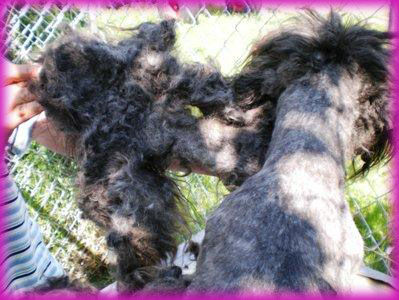 This huge matt is from just his neck and left shoulder. 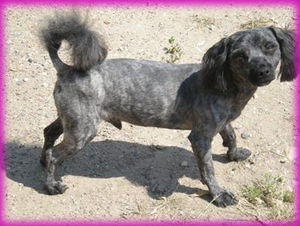 Notice Bingo is squinting in the bright sun light as the matted hair had caused an eye infection on top of sunlight finally reaching his eyes. Also note that he is standing funny because he still does not realize that the mats between his front and back legs are no longer pulling on his skin. He must have been in constant pain also from the thorns caught in the mats when he walked.

As for the man, although wealthy, he did not offer my helper and I one red cent for what took us over four hours to groom the poor dog, plus the Vaccinations I gave him, plus the Deworming for him, plus the Revolution used for him for Fleas/ Ear Mites, plus the eye drops for his infected eyes. Or our Gas for the long trip at today's price of fuel.

And the man is considered one of the richest people in that area with his fancy house and many fancy cars.

Back home, my helper and I had pooled our money to attempt to buy Bingo for a high sum of money to get him away from there. The Biting (not Sucking Lice) would require 4 baths, a week apart to eradicate them.

Finally, we were ready to approach the man and further help Bingo. I phoned him. It was to late, Bingo was already dead. And both my helper and I cried for a little dog's life cut short by "An Uncaring Owner".

All of us here are dedicated to teaching people about proper care of animals. Both the physical and mental well being of all creatures is everyone's responsibility. We need you to join us in fighting the good fight against animal abuse.

If you see animal abuse, either Physical or Mental, and don't know what to do about it, phone the Alberta SPCA if you live in Alberta OR the SPCA in your area!!!

All of us working together, one voice to help those creatures whom cannot speak out and help themselves. Taking even one tiny step towards stopping animal abuse is a large step for all mankind. Their suffering will continue if people like you and I do not step in and help them. They cannot help themselves, they need us.

<< Back To Animal Abuse
Login | Powered By: Techweavers Inc.